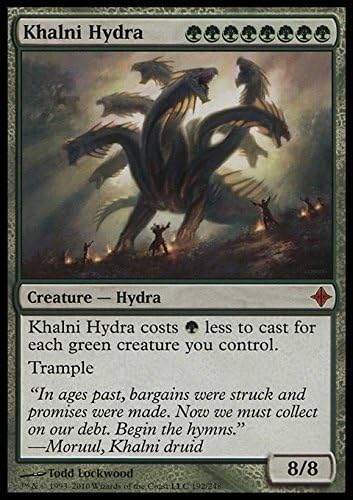 After a few weeks of fiddling with the prototype, I turned it over to Ken Nagle , who was leading the design of the product. The interplay between design and development is one of the elements that make us very strong as a department. Even though I had what appeared to be a workable game, it was far from as good as it could be. One of the reasons that we have both design and development teams is that we have found that handing our sets over to other people to work on leads to a higher quality product in the end.

To that end, what the Hydra needed was someone to spend time coming from a different angle and trying out new things with the product. I had a set of goals that I wanted to accomplish, but so did Ken. He was able to really expand what I had pictured the Hydra was into something far more robust.

When the set came back from design, a lot had changed. Ken did a wonderful job at creating a number of fun and interesting individual designs for the heads and spells, including a few "whammy" spells for the Hydra, which he had found players enjoyed. This created more of a feeling like you were playing a real opponent that you could interact with instead of a program.

It gave me a much better picture of the back and forth that I wanted the encounter to have. I was given the position of the lead for a small team, meeting for about two hours a week, to develop the Hydra. The first development playtest showed many of the strengths, as well as the weaknesses, of the design at that point. While everything had been put into place with a clear goal of what the player was supposed to do, he immediately did the opposite—not killing the heads on purpose.

While the tapping of heads gave the player a lot of strategic decisions, they often made the game too easy. Another round of changes occurred—heads not tapping when attacked, heads "regenerating" by revealing the top two cards, and each untapped head dealing damage. If players wanted to, they could play cards to tap the heads to interact with them and the Hero cards would give that opportunity , but it meant that they did need to do the "Hydra" thing and actually cut them off at some point.

One of the items that I had been pushing for and working on from my earliest versions of the Hydra Challenge was a playmat that would contain all of the rules and set-up instructions for the Hydra. There needed to be a way to make the rules as intuitive and easy as possible so a player could play it on his or her own. This did come with some baggage, though. It was during this time that the experience as a whole became far less complicated, but I think also was greatly strengthened as a result.

The concept of "elite" and regular heads was added to make it clear how to start the game, as well as giving the game more variety. The elite heads took some of the more fun enchantment abilities and turned them into triggers. In some of the feedback I have received, players have noted that the Hydra is weak against cards like Ratchet Bomb and Mind Grind.

Some of the earliest versions of the rules attempted to solve all of these problems, but what I quickly learned was that the attempts to fix everything was just going to require a lot more work than was really worth it. In the earliest attempts to get this to work, I had tried to get every card imaginable to interact in a sensible way with the Hydra, but that just meant the players were constantly rereading the rules text to figure out which printed corner-case was put in place to deal with the current situation.

Rather than addressing them one by one, we ended up cutting them down and implementing more generalized rules such as "just have fun. It was far more important to keep the rules at a manageable level. If you have ever called us to resolve a problem, chances are you spoke with a customer service representative. One of the perks of working in customer service is getting to come to the Pit on a regular basis to playtest upcoming sets or other products.

Customer service playtesters are wonderful at giving us a preview of how people less familiar with the products will handle what we are producing. Something that we found during playtesting with customer service was that a lot of the Hydra battle was determined in the first few turns, when the player would take a lot of damage and would then just be racing the Hydra.

Unless the deck he or she was playing had lifegain, it would feel more like a vice slowly crushing the player than an epic battle. The customer service representatives would often get frustrated as they would go to low life in the first few turns before managing to get a foothold in the game, only to get struck down by a card when the Hydra would live for a few more turns. One of the most interesting commanders to build a hydra deck around.

Genesis Hydra was one of the first Constructed-playable hydras. Spend a lot of mana, make a big threat, and gain another card in the process. As a commander, Gyrus, Waker of Corpses requires self-mill and a lot of small value creatures, preferably with enters- and leaves-the-battlefield abilities. Plus a lot of ramp so that it can be cast for a huge X to be more effective. Zaxara, the Exemplary does a lot of things a hydra tribal deck wants.

So you want to ramp your mana and put a lot of powerful X spells on your deck. Very similar to Apocalypse Hydra , the double strike part makes a big difference. And with spare mana the damage can be dealt to any target. Untapping with this much power is very frightening. Grakmaw, Skyclave Ravager is an interesting card that sees Constructed play here and there.

This was the card you wanted to mill against Rogue decks that wanted to mill you to death. A card that defined Standard and became one of the most interesting Simic cards, Hydroid Krasis is never bad. It becomes even more powerful in ramp deck. The interesting part is that the lifegain and card draw is on cast, not on resolution. This makes Krasis a good card against aggro, control, and midrange decks. As far as hydra lords go costing four less to play is a big incentive. It even creates hydra tokens when it dies.

Zaxara, the Exemplary generates mana, which is awesome to cast big creatures, and it also creates hydras whenever you play a spell with X in its mana cost which a lot of hydras have. Rosheen Meanderer is another incentive to cast hydras with X in their mana cost.

Reyhan, Last of the Abzan is a legendary Golgari hydra that cares about counters, which are on theme with hydras. See Doubling Season above. Give your big creatures trample and ramp when you hit the enemy with Kodama of the West Tree. Glorious Sunrise does everything you want: gain life, draw cards, pump your creatures, or ramp. Nykthos, Shrine to Nyx can generate absurd amounts of mana, especially if your deck is base green which most hydras are.

There are a lot of good and playable hydras in Magic. Hydras usually appear at rare and are at least Limited bomb tier with a lot of them seeing Constructed play. A lot of hydras are very efficient at their mana value and a lot of them have X in their cost which scales with the game or allows you to spend more mana in their activated abilities. Hydras and dragons are two different creature types in Magic. Polukranos, Unchained Illustration by Chris Rahn. Hydras are definitely playable in MTG.

The play pattern of playing a huge monster in a turn is also complicated, making it easier for an opponent to get a tempo advantage. Did I miss any that you think should be here? All rights reserved. The copyright for Magic: the Gathering and all associated card names and card images is held by Wizards of the Coast.

Hydras are powerful mythical creatures in Magic based on the legend that if you cut one of its heads off, two more grow in its place. Looking for a hydra commander to build around, or some good beefy creatures to include in your decks?

Well, look no further! Wildwood Scourge Illustration by Bryan Sola. Hydras are to green what dragons are to red or angels to white. Other iterations have the hydra grow when mana is spent or when it takes damage. Other hydras have an enter- or leave-the-battlefield effect that raises their playability by a lot. Although somewhat inefficient for Constructed, Hooded Hydra is nice if you have a lot of mana.

Double that if Doubling Season is involved. I found Hydra Broodmaster so cool when it was first revealed. Monstrosity is a cool mechanic and makes a lot of hydras. Limited bomb for sure, but it leaves a lot to be desired for Constructed applications.

Otherwise, there are better hydras out there. Neverwinter Hydra gets the nod for a couple reasons. It has ward 4 which helps a lot in surviving opposing removal. It also has a cool dice component yes, luck-based. As of Forgotten Realms there are even some cards that that synergize with dice rolls. One of the more unique hydras, Whiptongue Hydra is a flier terminator.

I think you get the idea. A storm hydra? Mistcutter Hydra saw Standard play out of the sideboard against blue decks, and haste was a big reason why. Besides being equal to almost all hydras, Steelbane Hydra does something very different in being a Naturalize. It has a lot of targets in a Commander deck. Having an immediate effect when entering the battlefield is a good way to be playable in Constructed, and Voracious Hydra has it.

It either fights a small creature or becomes a big threat. A good mix of abilities makes Ulvenwald Hydra worthy of consideration. Besides, it can tutor for any land in case you have special lands that need to be found. One of the best incentives to ramp out there. A good threat in general.

One of the few hydra lords out there, Gargos, Vicious Watcher is powerful. One of the most interesting commanders to build a hydra deck around. Genesis Hydra was one of the first Constructed-playable hydras. Spend a lot of mana, make a big threat, and gain another card in the process. As a commander, Gyrus, Waker of Corpses requires self-mill and a lot of small value creatures, preferably with enters- and leaves-the-battlefield abilities. Plus a lot of ramp so that it can be cast for a huge X to be more effective. 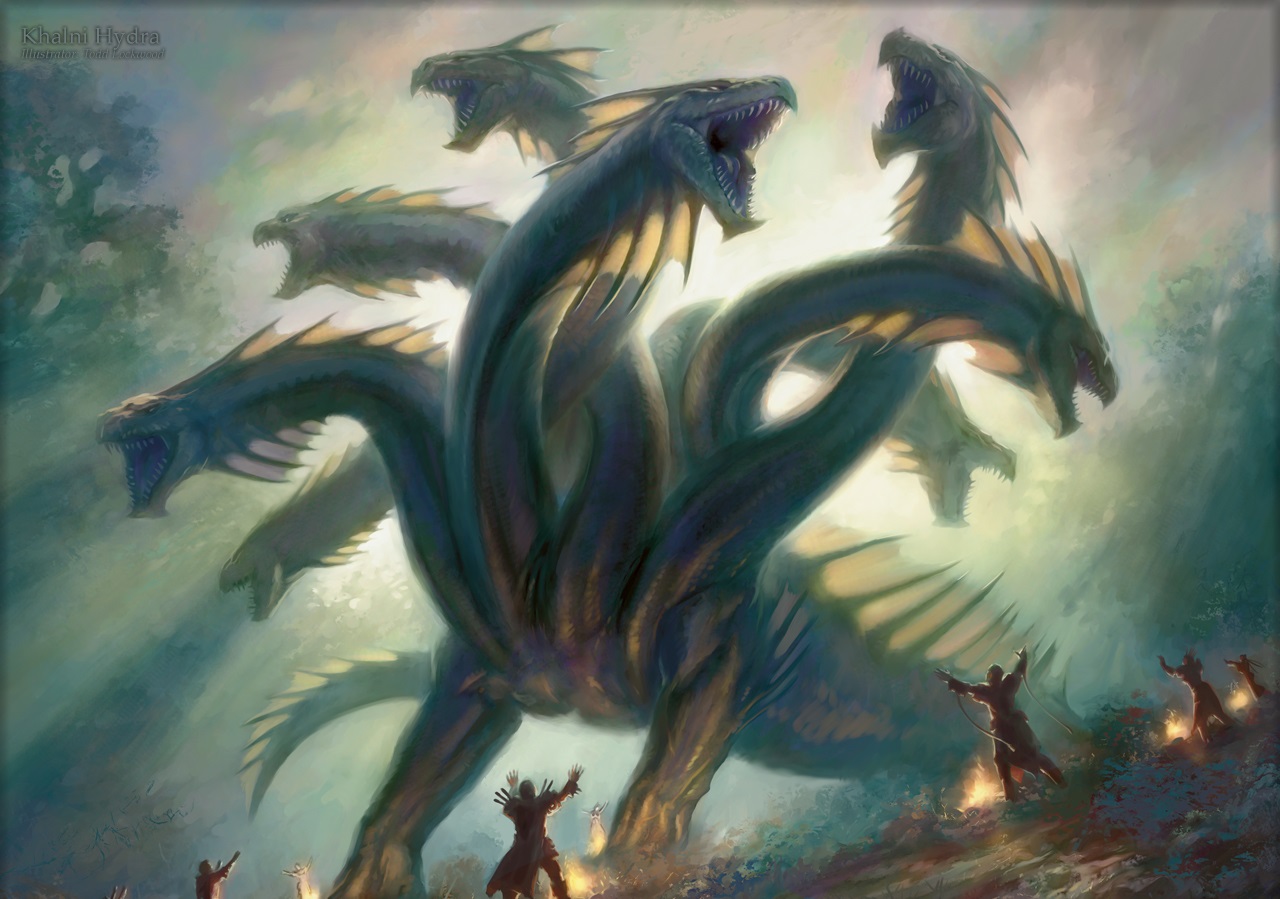 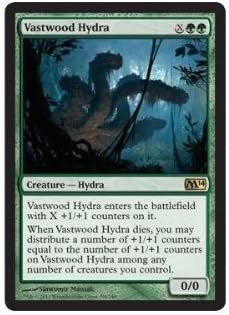